Don’t let their small size fool you; Blueberries may just be the most powerfully healthy food in the world, with benefits ranging from anti-aging to muscle recovery (plus, they taste good).

Even if you aren’t a fan of the “superfoods” craze, you have probably heard about the advantages of dark berries. Blueberries in particular carry a wide range of health benefits, which may seem surprising considering how tiny and common they are (let’s face it; some of the “superfoods” out there were never heard of in the U.S. before the internet). If you take some time to look deeper into the positive benefits blueberries carry, you’ll realize it’s almost a crime that we don’t hold blueberries in higher regard.

Blueberries: More Antioxidant-Rich than Almost Any Other Food

If you’re not familiar with what antioxidants do, here’s a primer. We’re constantly exposed to dangerous molecules known as free radicals through sources as diverse as cigarette smoke, radiation, toxic foods, household chemicals, air pollution, and (depending on who you ask) even cell phones. These molecules cause damage to our cells and contribute to aging and some severe diseases, such as cancer. Antioxidants protect us from these molecules, which is especially important these days because we’re unfortunately exposed to free radicals far more than the generations before ours were.

Pound-for-pound, blueberries contain more antioxidants than almost any other common food. Research (such as this study, which was published by the National Institutes of Health) has shown that these antioxidants are ported directly into the body, and aren’t lost through any bodily digestive or chemical processes.

In addition, blueberries are a great source of Vitamin C, Vitamin K, Manganese, and Fiber, and are low in calories compared to some other fruits. For comparison’s sake, 1 cup of blueberries contains 84 calories; while 1 cup of banana has over 200 calories. 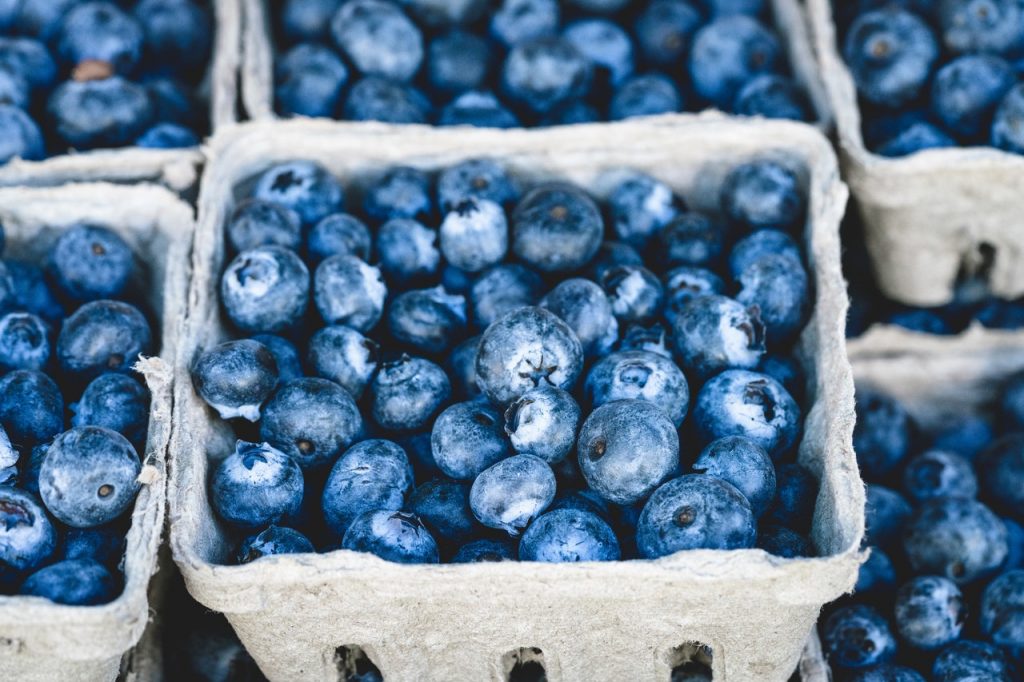 The Antioxidant Effects of Blueberries:

Blueberries and their antioxidants have been the subject of plenty of scientific study and observation. These studies have shown that eating blueberries positively affects everything from muscle recovery and insulin levels in diabetics to cholesterol and blood pressure numbers.

For example, in one study, scientists had 168 volunteers drink 1 liter (1 liter=about four 8oz glasses) of an apple-blueberry juice blend daily for a month. At the end of the month, they found that in the volunteers, DNA damage from free radicals was, on average, 20% less than the people in the study who had not been drinking the juice. This is important because it is believed that DNA damage is a major cause of aging.

Blueberries seem to have similar effects on mental aging as well.

In one study, scientists gave elderly people who had already been experiencing memory loss between 2-3 8oz glasses of blueberry juice daily (the amount of juice given to each subject was relative to their weight). After 12 weeks, they found that these people fared much better in memory and brain function tests than others who had been given a placebo beverage.

In another much larger study of seniors that was conducted in 2012, regular blueberry and strawberry consumption over a lifetime was linked to a slowdown in mental aging by roughly 1.5-2.5 years. By now, the world knows that fatty fish like salmon are excellent “brain food”, but it’s clearly time to treat blueberries with the same respect.

Blueberries: They’re What’s For Dinner (Or At Least For A Snack)

As we’ve already mentioned, blueberries are scientifically proven to hold a wide range of health benefits; a simple google search will reveal that there are many other benefits in addition to the ones we’ve mentioned already. So next time you’re in the supermarket, grab a container of blueberries; your body will thank you for it.

Want to know more about how you can adjust your diet and change your life? Then have a chat with us; we offer services such as nutritional testing, food sensitivity testing, and diet planning. Best of all, your initial consultation is FREE. Call 561-323-4994 to schedule your appointment, or click the link below and we’ll get in touch with you.

Get In Touch With Us

Cover photo by Anthony Shkraba and interior photo by veeterzy, both from Pexels